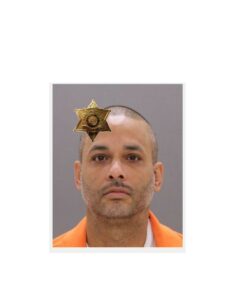 Sheriff Thomas J. Dougherty reports the arrest of a Monroe County resident on felony and misdemeanor charges following an investigation by the Sheriff’s Office.

On September 15, 2022, at approximately 4:00 a.m., Sheriff’s Deputies responded to a business on North Street in the  Village of Caledonia for the report of a possible burglary. Responding Deputies arrived on the scene and observed the broken glass door of the business. After contacting management, they confirmed that the cash register, money, and cigarettes were stolen.

During the investigation, Sheriff’s Investigators were able to identify several suspects, as well as the vehicle involved in the burglary. It is alleged that Juan M. Merced, age 45, Rochester, NY, was involved in the break-in.

On October 17, 2022, Merced was taken into custody by Deputy Sheriffs. Merced was charged with felony Burglary in the  Third Degree, felony Criminal Mischief in the Third Degree, Petit Larceny, and Conspiracy in the Fifth Degree.

Merced was transported and turned over to Central Booking Deputies at the Livingston County Jail for arrest processing and pre-arraignment detention. The District Attorney’s Office was contacted regarding bail due to the felony charges. It was recommended that Merced be held without the possibility of bail due to the suspect having prior felony convictions.

Merced was later arraigned before Village of Caledonia Justice Riggi. The Judge did remand Merced to the custody of the  Sheriff without bail.

This investigation is now closed, as all three suspects have been arrested.