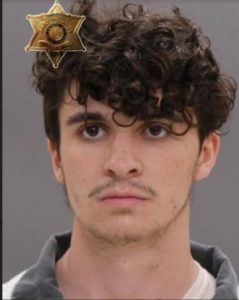 Sheriff Thomas J. Dougherty reports the arrest of a Nunda NY resident on felony charges  following an investigation into the injury of a three month old baby.

On June 3, 2021 the Sheriff’s Office was notified by Livingston County Child Protective Services (CPS) regarding a small child who was being treated at Strong Memorial Hospital for injuries that  were suspicious in nature. The baby was found to have multiple fractures in various stages of healing  including multiple rib fractures, a femur fracture to the right leg, fractures to all three bones (fibula,  tibia and femur) in the left leg and possible fractures to both right and left humorous bones (bone in  the upper arm).

Sheriff’s Investigators and Child Protective caseworker’s responded to the child’s home on State  Route 436 to investigate the cause of the child’s injuries.

The investigation alleges that the child’s father, 22 year old Dustin M. Smith, caused the injuries after  he became frustrated and angry while caring for his child. It is alleged that on multiple occasions  Smith forcefully squeezed and held his child down causing the injuries.

The baby is with family outside the home and an order protection was issued protecting the infant  from any contact with Smith.

Smith was turned over to Central Booking Deputies at the Livingston County Jail for processing and  pre-arraignment detention as the offense did qualify for pre-arraignment detention under the NYS  Justice Reform Act. The District Attorney’s Office was contacted in regards to bail due to the felony  level charges. It was advised that Smith should be remanded on $15,000 cash or $30,000 bond.

Smith was later arraigned at the Livingston County Centralized Arraignment Part (LC-CAP) at the  Livingston County Jail before Town of Caledonia Justice Mark Riggi. The Judge did remand Smith to  the custody of the Sheriff being held on $15,000 cash or $30,000 bond.

“There is no greater crime than a crime against an innocent child,” stated Sheriff Dougherty. “In this  case, an infant who has no voice to tell, no ability to run away and apparently has no protector in the  home. I commend the hospital staff that brought this to our attention, the caseworkers from  Livingston County CPS for their great work, the Sheriff’s Investigators that aggressively investigated  these heinous acts, as well as the Judge that reviewed the case at arraignment and followed the  recommendation on bail and the complete stay away order of protection.”