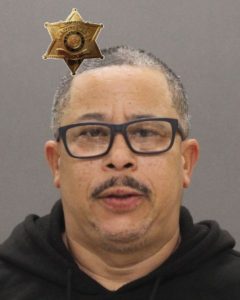 Sheriff Thomas J. Dougherty reports the arrest of a Monroe County NY resident on felony charges after a traffic stop.  On December 28, 2020 at approximately 2:00 pm, Sheriff’s Deputies were dispatched to the area of Linzy Road in the Town of Ossian for a traffic complaint involving an unregistered vehicle being operated on the roadway.

Dansville Police Department Sergeant Shannon Griese arrived in the area and located the vehicle. Deputy Gordon Truax also arrived at the location and began an investigation. The investigation identified that the operator of the vehicle was Pedro J. Valentin, age 48, of Rochester NY. Further investigation confirmed that the vehicle was unregistered and uninsured.  A records check revealed that Valentin’s driver’s license had been suspended a total of seventeen (17) times.

Valentin was arrested and charged with felony Aggravated Unlicensed Operation of a Motor Vehicle in the 1st Degree and violations of the NYS Vehicle and Traffic Law. The AUO charge was a felony because Valentin had more than ten (10) license suspensions on ten (10) separate dates for failure to appear, failure to answer a summons or failure to pay a fine.  Valentin was turned over to Central Booking Deputies at the Livingston County Jail for processing and released on appearance tickets, as the offenses did not qualify for pre-arraignment detention under the NYS Justice Reform Act and Deputies did set him free.

Valentin was provided a future court date to answer to the charges in the Town of Ossian Court.