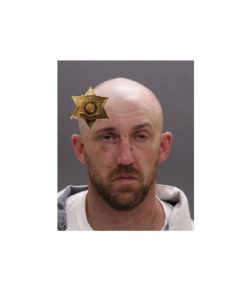 Sheriff Thomas J. Dougherty reports the arrest of a Nunda resident on felony charges following  an investigation by the Sheriff’s Office.

On June 22, 2022, at approximately 3:00am, Sheriff’s Deputies responded to the Village of Nunda, for the  report of a domestic dispute.

The investigation revealed that the dispute had been taking place intermittently over the course of a  couple of hours at an address on State Route 436, in the Town of Nunda. It’s alleged that, while at that  location, 34-year-old Wayne R. Gath of Nunda damaged another individual’s property by breaking the  windshield of a vehicle as well as spray painting the same property. Also during the incident, Gath  allegedly punched the female individual multiple times in the face, causing injury.

All of the alleged acts were committed against a female individual who was a protected party in an  active order of protection placed against Gath.

Gath was transported and turned over to Central Booking Deputies at the Livingston County Jail for  processing and pre-arraignment detention. The District Attorney’s Office was contacted in regards to bail  due to the felony level charges. It was recommended that Gath be held on $15,000 cash/credit or bond in  an amount deemed appropriate by the court

Gath was later arraigned at the Livingston County Centralized Arraignment Part (LC-CAP) at the  Livingston County Jail before Justice Provo. The Judge did remand Gath to the custody of the Sheriff,  setting bail at $20,000 cash/credit or $40,000 bond.

The investigation and arrest was conducted by Deputy Jamye Babocsi of the Patrol Division. The Nunda  Police Department did assist.