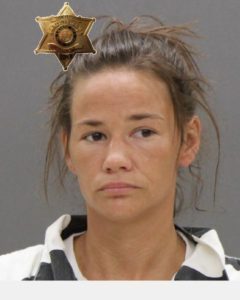 On April 22nd, 2021 at about 2:20pm, Sheriff’s Deputies and emergency personnel responded to the area of Richmond Mills Road, in the Town of Livonia, for the report of a vehicle that had left the roadway and struck an earth embankment.  Deputies arrived and met with the vehicle operator, identified as 31 year old Catherine L. Couture
from Livonia, NY. It was also discovered that there was a four (4) year old child passenger in the vehicle. There were no reported injuries as a result of the crash, but the child was transported by
ambulance to Highland Hospital as a precaution.

During the investigation, Sheriff’s Deputies suspected that Couture was under the influence of drugs.  Deputy Gage Harrison did conduct a Driving While Ability Impaired (DWAI) by drug investigation which included the performance of standardized field sobriety tests. At the conclusion of the investigation on scene, Couture was taken into custody for DWAI by drugs.
Couture was also found to be in possession of suspected marihuana and suboxone, which is a
controlled substance that she did not have a prescription for.

Couture was transported to the Sheriff’s Office substation in Lakeville where Deputy Michael Phillips, who is a certified Drug Recognition Expert (DRE), conducted an evaluation. It was the Deputy’s expert opinion that Couture was under the influence of a CNS depressant and cannabis and that she could not operate a vehicle in a safe manner.  Couture was arrested and charged with felony Aggravated Driving While Intoxicated (Leandra’s Law), Driving While Ability Impaired by Drugs, and Criminal Possession of a Controlled Substance in the Seventh Degree.

Assisting with the investigation on scene for the Sheriff’s Office was Deputy Morganne Harrington of the Patrol Division and Deputy Jerry Pilkenton of the Forensic Identification Unit (FIU), under the command leadership of Sergeant Matthew Thomas.