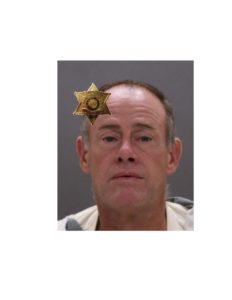 -Sheriff Thomas J. Dougherty reports the arrest of a Livonia resident on felony charges following an investigation by the Sheriff’s Office.

On September 7, 2022, at approximately 7:00 pm, Sheriff’s Deputies responded to an address in the hamlet of Lakeville, Town of Livonia, for the report of a domestic dispute that had just occurred.  The investigation revealed that 52-year-old Ernest C. Hutton of Livonia was involved in a verbal argument with a female individual. It was also learned that the argument escalated when Hutton allegedly pushed the female, causing her to strike a hard object and sustain a laceration above her eye.

All the alleged acts were committed against the female, a protected party, in two active orders of protection placed against Hutton.
Hutton was arrested and charged with two counts of Felony Aggravated Criminal Contempt in the First. Degree and Assault in the Third Degree.

Hutton was transported and turned over to Central Booking Deputies at the Livingston County Jail for processing and pre-arraignment detention. The District Attorney’s Office was contacted regarding bail due to the felony charges. It was recommended that Hutton be held without the possibility of bail because he has four previous felony convictions.