Note: According to a press release sent later Tuesday from the U.S. Attorney’s Office, all four defendants are facing increased federal charges that could result in a maximum of life in prison and a $10,000,000 fine. Take a look at our follow up here.

WEST SPARTA – The U.S. Attorney’s Office filed federal charges against four people, at least one of whom is believed to have been distributing meth from the Boneyard in West Sparta.

Kenneth Hoag, 55, of Dansville; Kurt Redance, 26, of West Sparta; Andrew Culliton, 37, of West Seneca; and now Brandie Schumacher, 37, of Rose, NY, are all federally charged with Conspiracy to Distribute Methamphetamine. The charges and face a minimum of 10 years in prison, a maximum of life and a $1 million fine.

“Those charges can be increased based upon the evidence in this case and the amount of drugs that were actually recovered,” said J.P. Kennedy Jr., Acting U.S. Attorney for New York State’s Western District.

In early April, the Wyoming County Sheriff’s Office arrested Schumacher for DWI and possessing pills and meth. A local judge held her at they Wyoming County Jail.

A federal judge will decide whether any of the four will be granted bail.

Livingston County Sheriff Thomas Dougherty said that citizen complaints have been coming in to his office alleging that Hoag was selling drugs at the Boneyard since 1997. To those who say ‘what took you so long?’ Dougherty says that it was difficult to get information on the meth ring’s inner circle.

“It was not for lack of information,” said Dougherty. “We were eventually able to infiltrate their circle.”

Speakers made it clear that there is no allegation that meth was being manufactured at the Boneyard.

You can watch the press conference, which was streamed on Facebook Live Tuesday morning, on our Facebook page here. 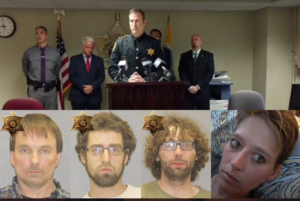