According to Kevin Niedermaier, Director of the Livingston County Office of Emergency Management, the fire started in a back room when an extension cord overheated, causing an emergency call to go out at about 12:30 a.m.

“The preliminary cause of the fire was determined to be an extension cord in a back room that was hooked up to a submersible pump that the occupants had set up earlier this year,” said Niedermaier. “There were boxes and items stacked on top of the cord, which built up resistance and heat.”

The two occupants, both women, heard their smoke alarm going off and left the house before the fire was too severe.

Firefighters successfully contained the fire to the back room where it started. There was some fire damage to a nearby kitchen and smoke damage throughout the home.

“The house was not a total loss,” said Niedermaier. “There was an expedient fire department response and a great save. Great job by all.”

The Red Cross is assisting the two occupants with temporary living arrangements while repairs to the home can be coordinated. 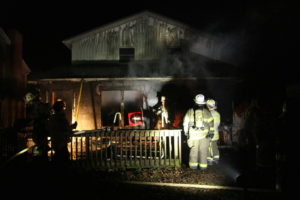