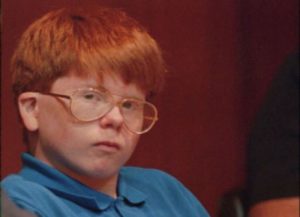 The NYS Parole Board decided to release Eric M. Smith who at age 13 lured a 4-year-old boy into the woods and strangled, sodomized and beat him to death with a rock.

“When I had seen him the first thought I had was I want to hurt him,” Smith, now 41, said during his 11th and final parole hearing Oct. 5 at the medium-security Woodbourne Correctional Facility.

Smith served more than 28 years and had 10 previous denials.

Reasons given by the board members included Smith’s age at the time of the attack, the childhood abuse he suffered and his clean prison disciplinary record. in granting release

The parent of the 4-year-old opposed his release.

Upon released Smith said he would likely live with his mother until the arrival of his fiancée, who is rumored to be his lawyer.  He stated he would use his prison training and get a job in electrical work or carpentry.