CASTILE – The disassembly process has begun for Letchworth’s iconic trestle over the raging Genesee.

Norfolk Southern’s new arch bridge is in place and carrying trains. As planned, disassembly of the much-loved, much-used trestle began with removal of railroad ties and top structural materials.

The disassembly process is expected to take about two months.

In addition to enhancing rail safety and operating efficiencies, the new arch bridge expands freight capacity and business opportunities for shippers from the Midwest to New England. With the new bridge, Norfolk Southern can now transport rail cars over the Southern Tier Line loaded to the industry standard 286,000 pounds, a key benefit for customers. The old iron truss bridge it replaces, built in 1875 by the Erie Railroad, was unable to support modern freight rail needs. Car weights had to be reduced 13,000 pounds below the standard, while train speed was restricted to 10 mph. Trains crossing the new bridge will operate at up to 30 mph.

Norfolk Southern says that the bridge will ‘support economic growth and jobs across New York’s Southern Tier region, connecting businesses from Buffalo to Albany with markets east and west.’ The new bridge will speed up train traffic and enable Norfolk Southern to run heavier rail car loads over the line, eliminating a major rail bottleneck for freight shippers.

The $75-million single-track bridge, which spans the Genesee River Gorge, was funded through a public-private partnership among Norfolk Southern, the New York State Department of Transportation, and the Federal Highway Administration.

“This new, state-of-the art bridge over the Genesee River Gorge is an engineering marvel and will enhance train traffic across the region,” said New York State Sen. Patrick M. Gallivan. “It also complements the beauty of Letchworth State Park and helps to restore the river to its natural state for the first time in nearly 150 years. This public-private sector project, funded by New York State, the Federal Highway Administration, and Norfolk Southern, will serve our community for decades.”

Among New York-based businesses benefitting from the new bridge are 10 short line railroads that service and connect local industries to Norfolk Southern’s network. Norfolk Southern transports freight over the Southern Tier Line for about 1,100 customers in more than 20 states. The line serves as a gateway for trade with Canada and provides a connection to New York City and New England markets.

The design and construction budget for the bridge project included $15.5 million provided through New York State, including a $2 million grant from the Finger Lakes Regional Economic Development Council and $13.5 million in state and federal funds through the New York State Department of Transportation; and $59.5 million from Norfolk Southern.

“The new Portageville Bridge complements the beauty of Letchworth State Park while providing safer, more efficient freight rail service,” said New York Gov. Andrew Cuomo. “Through a combined effort with Norfolk Southern, government leaders and the public, we have built a modern arch bridge which will support economic growth in the region and continue our drive to strengthen and modernize transportation infrastructure across the state for generations to come.” 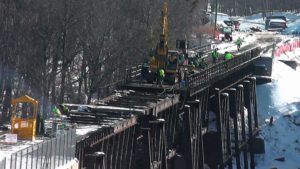