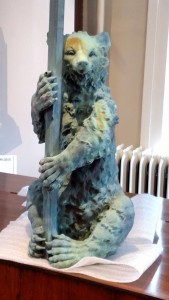 GENESEO — Emmeline has officially arrived at the Livingston County Museum on Center Street, which will be her home until the fountain is reconstructed over the next year.

According to Anna Cylke, Museum Administrator of the Livingston County Museum, the bronze statue is in the auditorium on top of the piano, a spot which positions her perfectly for selfies with and up close, personal photos.

“It’s rare to see her features so up close,” said Cylke. “It really is a beautiful sculpture. There is a suggested donation of $1 to the Museum for a selfie with her.”

Cylke said that visitors to the museum will be able to touch Emmeline’s nose and make a wish.

The Museum will stay open on May 14, SUNY Geneseo’s Graduation Day. Graduates will be given a final opportunity to take pictures with the Village’s greatest icon before departing.

The Geneseo Board of Trustees agreed on Monday that the museum would be a safe place for the bear while the monument restoration team at Moorland Studios and their stoneworking partners work on fixing the fountain that a tractor trailer struck and badly damaged on April 7.

The question of precisely when Emmeline will be back in her rightful place is still up in the air. Moorland Studios has informed the Village that the base of the fountain may be damaged beyond repair.

If that is the case, it will take some time for granite to be assessed and considered as a medium from which to carve a new basin. Additionally, Liberty Mutual, the insurer for Upstate Farms, has final say as to whether or not Moorland Studios can continue doing the repair work.

For now, Emmeline has a loving home.