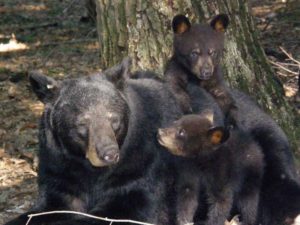 Just before Christmas, the Genesee Sun featured an article on the killing of a ‘once in a lifetime’ bear in Letchworth State Park.

The hunter, Matt Sphar, describes shooting the animal and watching him slide off a steep ridge. He left the wounded bear overnight, returning with six friends to track him the next day. It is probable that the bear died slowly. A quick death would have meant spoiled flesh more than 12 hours later, and Sphar claims to have used the meat. Hunting instructor Dr. Ken Nordberg notes that ‘Whatever the weather conditions, a 250+ pound bear will spoil as quickly as a 250+ pound carton of 100-degree milk.’

There’s no mention of the bear’s suffering, however, or how long it took him to ‘safely expire.’ It’s of little consequence to the hunter, who says he has ‘great respect’ for the animals he kills, and who is shown grinning and hoisting the dead bear for a photo. The bear’s head and tongue droop.

Bear hunting is rightly categorized as trophy hunting, and indeed, the bear Sphar killed will be reduced to a full-body rug. But the article emphasizes the use of the bear’s flesh in a defense so common that it remains unexamined by most readers. While the meat rationale would’ve been legitimate years ago, hunters are now ‘sportsmen,’ and survival is absent from the equation. To Sphar’s insistent defense that he will eat the bear, I ask: So what? It makes no difference to the bear, who died needlessly.

Others attempt to justify the killing by citing the potential danger of bears to park visitors. Sphar is correct that bears ‘stick to…hidden pockets if they can, which is why they’re so rarely seen,’ but because so few of us have ever witnessed black bears in their natural environment, public perception is more often misinformed by sensationalism. A lifetime of research by Dr. Lynn Rogers, founder of the North American Bear Center and the preeminent black bear biologist in North America, shows black bears to be tolerant, passive, and shy. Hunters themselves pose the greater threat to other humans, killing about 100 each year in hunting accidents. In nearby Chautauqua County, for example, Rosemary Billquist was killed by a deer hunter while walking her dogs just before Thanksgiving, an activity enjoyed by thousands of park visitors each fall at Letchworth. To those who claim that despite the risks of hunting, there are simply too many black bears, a 2016 press release by NYSDEC Acting Commissioner Basil Seggos proves otherwise: ‘DEC’s…strategies are working to increase the black bear population and allow for expanded hunting opportunities.’

Most people I spoke with after the bear’s killing have never seen a black bear in the wild, though they’d like to, and most were horrified to learn that New York state parks allow hunting. Wildlife refuges do, too. Habitat loss is the greatest threat facing wildlife survival, which begs the question, If wildlife can’t live on protected land dedicated to the preservation of nature, where can they live? And if state parks are open for hunting with bows and arrows—and shockingly, guns–where can non-consumptive outdoor enthusiasts safely enjoy the natural space that they, not hunters, predominantly fund?

While the American Model of Conservation states that wildlife ‘belongs to everyone and no one,’ consumptive interests exclusively define wildlife management. Game animal populations are strategically inflated to satisfy those who commodify them. Compensatory rebound in deer ensures that individual numbers not only recover after hunting season, but often increase. Keystone predators, whose populations balance those of prey, are killed because they threaten deer harvest. The use of lead ammo not only on private land but on refuges and in parks has resulted in the poisoning of bald eagles and other wildlife. As long as the DEC profits from hunting, such practices will continue.

I’ve been fortunate enough to have once seen a black bear. I was nine years old, on a camping trip with my dad, and though the bear wasn’t as large as the one Sphar killed, the sighting was magical and otherworldly. I didn’t see his face, since he was lumbering away from us into the cover of the woods. This was my ‘once in a lifetime bear’—a creature who had no interest in me or my agenda, who had his own pursuits, likes and dislikes, and who was important to the natural system to which he belonged. The recreational killing of wildlife has no place in New York’s state parks. Hunters care enough about their own rights to pursue them relentlessly; those who have an interest in preserving environmental integrity, and in defending the lives of animals for the animals’ sake, must care more.