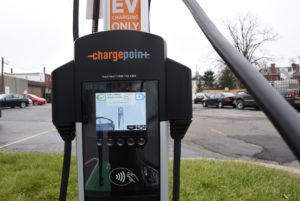 GENESEO – The Village’s new car charging station is providing free electricity for the next two years.

“This really is the wave of the future,” said David Keefe, Coordinator with GRCC. “There’s a photo I saw of the Easter Parade on 5th Avenue in New York City, 1900, and the caption says ‘find the car.’ The street is covered with horses but there is one car hidden off to the side. Another photo of the same street in 1913 says ‘find the horse.’ The street is covered in cars and there’s only one horse. Right now we’re saying ‘find the electric or hybrid car.”

Hatheway said that the deadline has passed for the Village to qualify for NYSERDA’s Clean Energy Communities grants but will benefit from clean energy initiatives like the charging station and LED light bulbs in lamp posts.

“When David Keefe took the time to approach the Village Board about this about a year ago it got us all thinking about these clean energy things,” said Hatheway. “When the opportunity presented itself, we jumped on it. This is a potential benefit to our commercial center as drivers can shop downtown as they wait for their vehicles to charge.”

Keefe said that GRCC’s idea is for this charging station and the four others they installed in the region to benefit to downtowns beyond Geneseo. The idea was to create a ‘corridor effect’ for short-range electric cars with stations in Geneseo, The City of Batavia declined a charging station but GRCC is installing one at Batavia Downs.

“Suppose I live in Brockport and I want to go to Letchworth,” said Keefe. “I could drive there and back, but now I can stop at a few towns and shop on a full charge.”

Hatheway cut the ribbon Saturday alongside Keefe and Dom Genova, owner of Genesee Valley Motors, who brought a 2018 Chrysler Pacifica, a hybrid SUV, to demonstrate the charging station. Genova said that these cars can get 84 miles to the gallon and may someday soon be self-driving. State and federal governments offer incentives for electric vehicle purchases that vary with vehicle efficiency.

“This is the wave of the future but the infrastructure has to be in place,” said Genova. “Just think, nobody knows how to wind a watch anymore.”

Ripples of the new charging station are already being felt. As the press conference and ribbon cutting ceremony were winding down, attendees had to move out of the way as a driver asked to pull up and charge their Ford Focus. 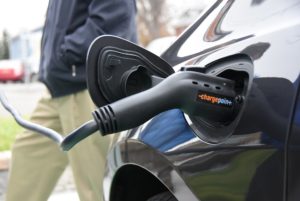 The station plugs into the Pacifica. (Photo/Conrad Baker) 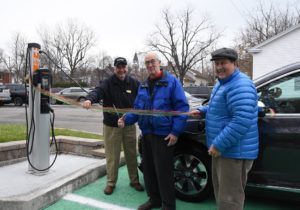