LIVINGSTON COUNTY – Unofficial results say that it was a historic night for the Livingston County Conservative Party.

Mike Falk successfully ran on the Conservative line against Republican and Democratic candidate Colleen Allen. Falk took 851 votes, or 64.13 percent. Allen took 475 votes, or 35.80 percent. This is the first time that a Conservative has been elected to a position on the Livingston County Board of Supervisors.

“Had it not been for the trust that the Conservative Party and Chairman Jason McGuire placed in me back in May, we would not be here today,” said Falk. “It was on Row C that Democrats, Republicans, Conservatives, Independents and many unaffiliated voters came together to demand positive change for our town.

‘The key to our victory was identifying real issues early, and to start doing something about them now—not waiting to be seated as a supervisor. Now, we’re poised to bring Lima into the future, while not neglecting our storied past. Tonight, we have a mandate for a new direction—one that will help us grow our small-business commerce and our overall sense of community. I can’t wait to continue what we’ve started.”

“Sadly, the people of Lima are looking at empty storefronts, and a vacant lot where the town’s only grocery store formerly sat,” said McGuire. “Many residents are worried that they’ll soon lose their post office as well. When Mike Falk interviewed with our party last May, we heard a candidate who loved Lima and would offer hope to the residents of the town.
‘But, in the race for Lima Town Supervisor, we ultimately faced an opponent, Colleen Allen, who had united the Republican and the Democratic ticket. Mrs. Allen was a candidate who had the backing of the town’s political establishment. We knew we would be the underdog, we always are. However, the Livingston County Conservative Party is a small—but scrappy—party. We believed we could win.
‘We worked with Mr. Falk to build a campaign that provided a fresh perspective and positive solutions to the community. The message resonated with the residents. The people of Lima have given Mike Falk a mandate for positive change. We’re thrilled with this historic win. Supervisor-elect Falk will serve Lima residents and all of Livingston County well as a town supervisor.”

Eyes were fixed on several other races Tuesday night. 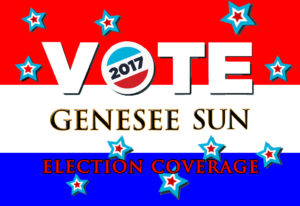