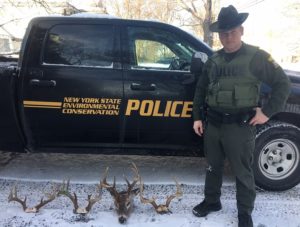 An ECO stands with three deer crowns and a deer head. (Photo courtesy of the Livingston County District Attorney’s Office)

Feil paid $5,540 in poaching fines and surcharges on Thursday afternoon in Town of Livonia Court.

The DA’s Office and DEC ask members of the public who believe they have witnessed an environmental crime or believe a violation of environmental law occurred to call DEC’s Division of Law Enforcement hotline at 1-844-DEC-ECOS (1-844-332-3267).