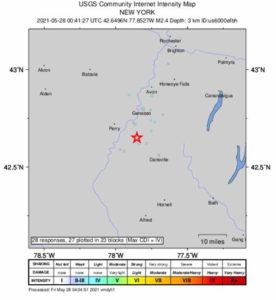 Calls started coming into the Livingston County Sheriff’s office shortly  after 8:30 p.m. Thursday night concerning an earthquake in southern Livingston County, which was also felt by some in Steuben County.

According to the USGS, the earthquake was about a 2.4 magnitude, which would go unnoticed by some, and was centered around 12,000 feet below the surface.

The earthquake was centered near Tuscarora, south of Mt. Morris.  Livingston County Sheriff Tom Dougherty tweeted to residents that there was no cause for alarm, and no reported damage.