YORK – The Livingston County Sheriff’s Office arrested a Scottsville resident for DWI and speeding for allegedly driving past a deputy at an extremely high speed.

According to a press release from Sheriff Thomas Dougherty, Megan Rudney, 21, was arrested for misdemeanor DWI and Speed in Zone, a violation.

Shortly after midnight on Aug. 5, Deputy Connor Sanford of the Sheriff’s Office STOP DWI Unit was shooting stationary RADAR on Rte. 20 (Telephone Road) in the Town of York when he allegedly saw a vehicle traveling east at a high rate of speed and RADARed the vehicle at 107 mph.

The vehicle was stopped and the occupants of the vehicle were met with. The operator was identified as Rudney.

A roadside DWI investigation was launched and Rudney performed field sobriety tests. Following the investigation, Rudney was placed under arrest for Driving While Intoxicated.

Rudney was transported to Central Booking at the Livingston County Jail for a breath test. Deputy Anastassia Vasile of the Sheriff’s Office Jail Division administered the test, which found a BAC of .08 percent.

Rudney was processed by Deputies and released on appearance tickets to appear in court at a later date. 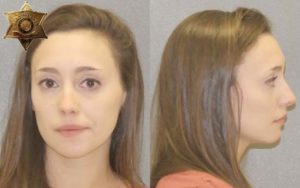