LIVONIA – The Livingston County Sheriff’s Office arrested two Lima residents for allegedly plowing through a stop sign and getting stuck on a West Lake Road lawn with their children in the vehicle.

On Feb. 5, 2017 at about 9 p.m., Deputy Sheriffs responded to a report of a vehicle into a yard on West Lake Road. Upon arrival, Deputies found that a car had driven through a stop sign on Lima Road, went off the road into a yard and became stuck.

Deputy Matthew Moran was first on scene and began interviewing the occupants of the vehicle. Katherine Meyers allegedly told Moran that she was driving and that her husband and her two children ages 12 years and 6 months were passengers in the car. The Deputy suspected that Katherine had been drinking and began a DWI investigation.

Deputies Brandan Flickner and Connor Sanford from the Sheriff’s Office STOP DWI Unit responded to the scene to assist with the investigation. The Deputies concluded that Katherine was under the influence of alcohol and she was placed under arrest for DWI. Deputies allege that Katherine became aggressive with Deputies and pushed one in the chest. Katherine was secured in the back of a patrol car while the investigation continued.

Further investigation on scene alleges that the husband, Eric Meyers, who is on probation, was actually the driver of the car when it crashed. Eric was also believed to be under the influence of alcohol and Deputy Flickner began a DWI investigation on him. Following the roadside investigation, Eric was taken into custody for DWI.

A breathalyzer allegedly showed that Eric Meyers had a BAC of 0.19 at the scene.

The children were turned over to family members and Child Protective Services were notified.

Both Eric and Katherine Meyers were taken to the Livingston County Jail and turned over to Central Booking Deputies for processing and pre-arraignment detention. The District Attorney’s Office recommended bail of $5,000 cash or $10,000 bond for Eric. 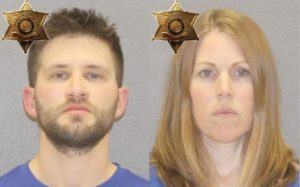