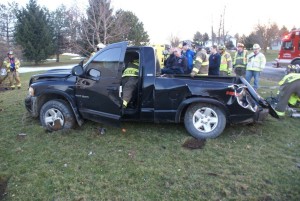 LIVONIA – A Livonia man was arrested for DWI on Sunday after crashing his truck into two trees with his 11-year-old son in the front seat.

According to a press release from Sheriff Thomas Dougherty, Joseph Mosher, 38, was arrested for felony Driving While Intoxicated under Leandra’s Law, Driving While Intoxicated, misdemeanor Endangering the Welfare of a Child, misdemeanor Criminal Mischief in the Fourth Degree, and numerous Vehicle and Traffic Law violations including Reckless Driving, Failure to Stop at a Stop Sign, Failure to Keep Right, Failure to Use Designated Lane, Crossing Hazardous Markings and Speed Not Reasonable/Prudent.

On March 6th, 2016 at approximately 5:39 p.m., Sheriff’s Deputies responded to the area of Pennemite Road and Cleary Road in the Town of Livonia for the report of a car crashing into a residential house.

Responding Deputies found that the vehicle had come to rest in the front lawn of a residence in the 4700 block of Pennemite Road, causing damage to two trees and the lawn but had not struck the home.

The operator of the vehicle was identified as Mosher of Livonia. A DWI investigation was conducted at the scene by Deputy Connor Sanford of the LCSO STOP DWI Unit.

Mosher was placed in custody for Driving While Intoxicated following the on-scene investigation. Both Mosher and his son were transported to Strong Memorial Hospital for non-life threatening injuries and have both since been released.

A sample of Mosher’s blood was secured at the hospital to determine his blood alcohol content at the time of operation. 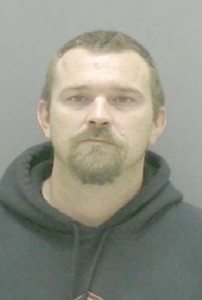 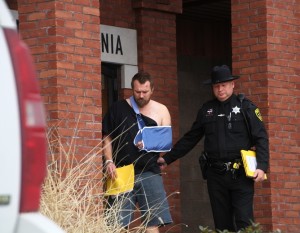