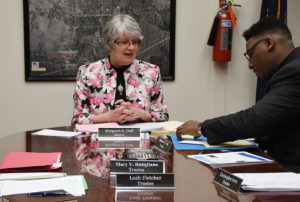 Mayor Duff at the head of the table with Matt cook as deputy Mayor to the right. (Photo/ Josh Williams)

GENESEO — It’s been 32 years since there’s been a new face at the head of the Geneseo Village Board, and that all changed in a short ceremony to kick off Monday’s Village Board meeting.

In addition to the new Mayor being sworn in Leah Fletcher and Christopher Ivers were sworn in as Village Trustees. They join incumbents Mary Rutilgiano and Cook making the Village Board all Democrat Party members.

Mayor Duff won her seat in the spring 2018 election where she won in a landslide victory over Richard Hatheway whom served as Mayor fro 32 years. The Board read an official proclamation acknowledging Mayor Hatheway’s many years of service.