LIVINGSTON COUNTY – The driver who struck a young man’s car at an Avon gas station pled guilty to felony DWI on Tuesday.

Lon Jarrell, 62, pled guilty to DWI which was charged as a felony because he had a DWI conviction within the past 10 years. The offer from the District Attorney’s Office is one to three years in prison and he will return to court at a later date for sentencing.

“I’m reluctantly going along with an adjournment for sentencing,” said Judge Robert Wiggins.

Jarrell’s silver SUV is visible eastbound on Rte. 20 (E Avon Lima Road) when it leaves the roadway, veers back across the road and collides with a car pumping gas at Dutch Hollow Market.

The Livingston County Sheriff’s Office investigated the accident and arrested Jarrell for having a BAC of 0.14 percent.

He was convicted of DWI in Livingston County on 2007. 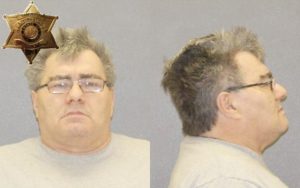