AVON – New York State Police arrested a Geneseo woman Sunday on several charges after her vehicle was found in a ditch on Lakeville Road.

According to a press release from State Police Troop E Commander Richard Allen, Ashley Adkins, 33, was arrested for Driving While Ability Impaired by Drugs, Criminal Possession of a Controlled Substance in the Seventh Degree, and Criminal Possession of a Weapon Fourth Degree, all of which are misdemeanors, two public health law violations for Controlled Substance Not in Original Container, and vehicle and traffic infractions.

On Nov. 26 at about 1:35 p.m., State Police from SP Geneseo and SP Lima were advised of a vehicle being operated erratically on 390 southbound in Monroe County, headed south towards Livingston County. A short time later, a trooper was dispatched to a report of a vehicle matching the description in a ditch on Lakeville Road in the area of Exit 9 in Avon.

The trooper allegedly found the vehicle, which was a white Honda Civic, in a ditch with Adkins. She was allegedly alone in the vehicle and operating with a driver’s permit only. Adkins allegedly failed field sobriety tests and was taken into custody for DWAI drugs.

A vehicle search was conducted and yielded three grams of marijuana, various narcotic pills, and a wooden ‘billy club.’ Section 265.1 of the NYS Penal Law specifically names a ‘billy’ as an illegal weapon.

She was released to return to Avon Town Court at a later date. 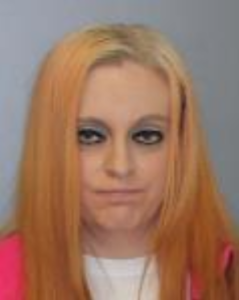