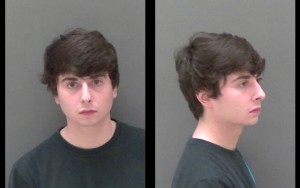 LEICESTER – The Livingston County Sheriff’s Office arrested a Leicester resident for allegedly driving under the influence of pain killers and marijuana after he crashed his car into a creek on River Road.

According to a press release from Livingston County Sheriff Thomas Dougherty, Ryan Bonadonna, 19, was arrested for Driving while Ability Impaired by Drugs, a misdemeanor, and Failure to Keep Right, a Vehicle and Traffic infraction.

On March 3 at approximately 4:23 p.m., the Livingston County Emergency Communications Center received a call for a vehicle into the creek on River Road in the Town of Leicester.

Sheriff’s Deputy Williams was immediately responded and arrived on scene to find Bonadonna on the side of the roadway and his vehicle in the creek taking on water.

After speaking with Bonadonna, Deputy Williams believed that Bonadonna may be impaired and requested Deputy Brandan Flickner of the Sheriff’s STOP DWI Unit to respond to the scene to conduct a DWI investigation.

Bonadonna was transported to the Livingston County Sheriff’s Office for Deputy Flickner, who is a certified Drug Recognition Expertm, to perform a drug evaluation on Bonadonna. At the conclusion of the drug evaluation, it was Deputy Flickner’s expert opinion that Bonadonna was under the influence of a Narcotic Analgesic and Cannabis and was unable to operate a vehicle safely.

Bonadonna was turned over to the Livingston County Jail to be processed and held until arraignment. Bonadanna was arraigned on March 4 in Leicester Town Court before Judge Smith.