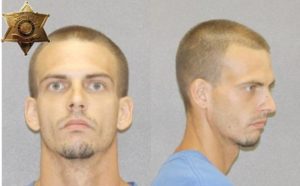 AVON – The Livingston County Sheriff’s Office arrested a Nunda resident after he apparently crashed into a fire hydrant and utility pole on State highway 15 (West Henrietta Road) in Avon.

According to a press release from Sheriff Thomas Dougherty, Cory Curry, 25, was arrested for felony Driving While Ability Impaired by Drugs (DWAI), felony Aggravated Unlicensed Operation of Motor Vehicle (AUO) in the First Degree, and numerous vehicle and traffic law violations.

On Saturday July 9 at approximately 2:44 a.m., Deputy Sheriffs were dispatched to the area of 1534 West Henrietta Rd in the Town of Avon for the report of a one-car crash.

Upon arriving on scene, Deputies determined that Curry was operating his pickup truck south on West Henrietta Road when he lost control and struck a fire hydrant and utility pole that was holding a transformer belonging to National Grid.

The East Avon Fire Department and Avon EMS responded to the scene and treated Curry. He signed off on any further medical attention.

Deputy Rick Gage conducted a sobriety investigation which concluded with Curry’s arrest for Driving While Ability Impaired by Drugs. Curry was transported to the Livingston County Sheriff’s Office headquarters in Geneseo where Deputy Brandan Flickner, a certified Drug Recognition Expert, conducted a drug evaluation. It was Deputy Flickner’s expert opinion that Curry was impaired by drugs and could not operate a vehicle safely.

Curry was processed at Central Booking at the Livingston County Jail and held in pre-arraignment detention.

Avon Town Justice Peter Pimpiano arraigned Curry on July 9 and went along with the recommendation of District Attorney Greg McCaffrey to remand Curry to the Livingston County Jail on $3,000 cash or $6,000 bond.

The investigation was conducted by the following Deputies: Deputy Richard Gage, Deputy Connor Sanford of the Sheriff’s STOP DWI Unit, Deputy Michael Williams of the Forensic Identification Unit and Deputy Brandan Flickner of the STOP DWI Unit, all members of the Livingston County Sheriff’s Office.