GENESEO – Multiple members of Geneseo Central School’s football team were dismissed due to violations of the student code of conduct.

Geneseo Police Chief Eric Osganian said that a player stole and distributed his parents’ Oxycotin pills without their knowledge. Up to 7 students are involved. A statement from the District is as follows:

“A number of players have been dismissed from the Geneseo High School Varsity Football Team. These dismissals stem from serious violations of the District’s Code of Conduct and Athletic Eligibility Standards.

‘Due to the number of student-athletes involved and the serious nature of this incident, pursuant to our Athletic Code and New York State Public High School Athletic Association standards, the remainder of the varsity football season will be forfeited. The District has also forfeited the game played against Boliver-Richburg that was played this past Friday.

‘The Junior Varsity and Modified Football Teams will continue their seasons as planned.

‘The Geneseo Central School District is committed to upholding the highest standards of excellence in all of our academic, extra-curricular and athletic programs. We will continue to work with all of our student-athletes to ensure that their actions represent the expectations of our District and community.”

Osganian said that the Livingston County Sheriff’s Office is closely assisting in the investigation because one person alleged to be involved is a relative of a member of the Geneseo Police Department. 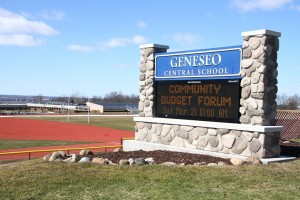