GROVELAND – The Livingston County Sheriff’s Office arrested a Dansville man for allegedly driving under the influence of drugs and alcohol after he struck an environmental police officer’s patrol vehicle on West Lake Road.

According to a press release from Livingston County Sheriff Thomas Dougherty, Andrew Murphy-Longhini, 21, was arrested for misdemeanor Driving While Ability Impaired by Combination Drugs and Alcohol, misdemeanor Leaving the Scene of a Property Damage Accident, and misdemeanor Criminal Possession of a Controlled Substance in the Seventh Degree.

The incident began on June 25, 2017 at approximately 5:10 p.m., When DEC Officer Brian Wade was parked roadside on West Lake Road conducting an DEC related investigation. A vehicle that was traveling southbound sideswiped his patrol vehicle and did not stop. The Officer was able to pull the vehicle over about a mile and a half down the road and take the driver, identified as Murphy-Longhini, into custody. Fortunately, there were no injuries as a result of the collision, just damage to both vehicles.

Deputies were dispatched to assist with the investigation. During the course of the roadside investigation, Deputy Brandan Flickner of the Sheriff’s STOP DWI Unit, had reason to believe that Murphy-Longhini was operating under the influence of drugs and alcohol.

Deputy Flickner transported Murphy-Longhini to Sheriff’s Office HQ in Geneseo where Deputy Matthew Thomas, also of the Sheriff’s STOP DWI Unit, administered a breathalyzer test and Officer Ben Swanson, a Certified Drug Recognition Expert (DRE) from the Geneseo Police Department, administered a drug evaluation. The DRE alleges that Murphy-Longhini was under the influence of alcohol, a central nervous system depressant, a narcotic analgesic, and that he could not operate a vehicle safely.

Murphy-Longhini was to be turned over to Central Booking Deputies at the Livingston County Jail for processing and pre-arraignment detention.

However, prior to his intake, it was found that Murphy-Longhini was in possession of a Xanax bar, which is a controlled substance that he did not have a prescription for. This resulted in an additional drug charge. 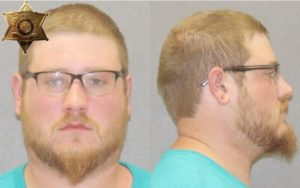