GENESEO – A driver knocked down the wall to his own apartment in the Meadows Sunday night.

According to first responders who were at the scene, the 21-year-old male driver is believed to have mistakenly hit the gas instead of the brake while coming in to park outside his apartment at Building 7.

Geneseo Police confirmed that the driver was not believed to be impaired at the time of the accident.

So far, it appears that the driver damaged his own apartment only in Building 7. However, Village of Geneseo Code Enforcement will check the building to make sure it is safe.

Firefighters and an ambulance with Geneseo Fire and Ambulance responded to the scene. The Geneseo Police Department investigated and confirmed that they did not file any criminal charges for the incident. 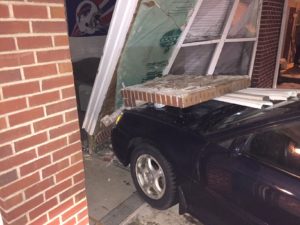