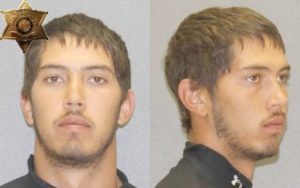 GENESEO – The Livingston County Sheriff’s Office arrested a Hornell man on a felony charge for allegedly carrying cocaine on 390.

According to a press release Sheriff Thomas Dougherty, Skyler Culley, 22, was arrested for Criminal Possession of a Controlled Substance in the Fifth Degree, misdemeanor Aggravated Unlicensed Operation of a Motor Vehicle in the Third Degree, and violations including Unlawful Possession of Marijuana and Speeding.

On Oct. 13 at about 7:05 p.m., Deputy Shawn Whitford pulled a car over for allegedly speeding on I-390. The Deputy determined that the driver of the car, Culley, was operating with a suspended driver’s license. Culley was taken into custody on the Aggravated Unlicensed Operation charge.

Culley was transported to Central Booking at the Livingston County Jail for processing and pre-arraignment detention.

Geneseo Town Justice Kathleen Houston arraigned Culley on Oct. 14 and ordered him held at the Livingston County Jail on $1,500 cash or $3,000 bond.