LIVINGSTON COUNTY – The Livingston County Sheriff’s Office arrested a Rochester resident for allegedly driving with 36 suspensions on his license.

According to a press release from Sheriff Thomas Dougherty, Ryan Lajuett, 32, was arrested for felony Aggravated Unlicensed Operation in the First Degree.

On June 20, Deputy Brandan Flickner, a member of the STOP DWI Unit assigned to Operation Safe Interstate, stopped a vehicle on 390 for an alleged vehicle and traffic law violation. The driver of the vehicle, identified as Lajuett, was found to be operating the vehicle with a license that had been suspended 36 times (33 scoffs on 12 separate dates).

Lajuett was taken into custody and turned over to Central Booking Deputies at the Livingston County Jail where he was held on pre-arraignment detention.

The Livingston County District Attorney’s Office recommended that Lajuett’s bail be set at $1,500 cash or $3,000 bond.

Lajuett was later arraigned in the Town of Avon Court before Justice Michael Torregiano. The Judge did remand Lajuett to the custody of the Sheriff on the recommended bail. 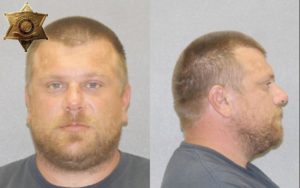