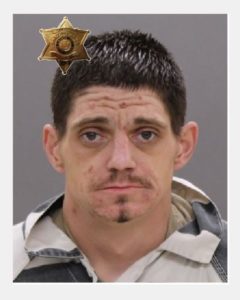 On January 6th, 2022 at about 6:30pm, Sheriff’s Deputies responded to the area of Deerfield Road and Parker Road, in the Town of
Portage, for the report of a vehicle that had left the roadway and was disabled.  The operator of the vehicle was ultimately identified as Johnathan D. Sick, age 33, from Arkport, NY. During the initial stages of the investigation Sick did provide Deputies with false information regarding his identity, claiming to be another individual until his true identity was proven. The roadside investigation did reveal that Sick was in possession of an illegal switch blade knife. Additionally, Sick was found to be in possession of a quantity of suspected methamphetamine, which he had concealed on his person in the attempt to prevent Deputies from discovering it. The suspected drugs did later test positive for methamphetamine.

A records check revealed that Sick’s driving privileges in NYS had been suspended a total of four times. The check also showed that
Sick had been previously convicted of several crimes.

Sick was transported and turned over to Central Booking Deputies at the Livingston County Jail for processing and pre-arraignment
detention. The District Attorney’s Office was contacted in regards to bail due to the felony level charges. It was recommended that
Sick be released on his own recognizance as the charges do not qualify for bail under the NYS Justice Reform Act.