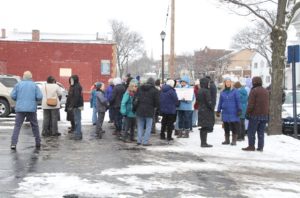 GENESEO – Protesters from Livingston and neighboring counties gathered outside Congressman Chris Collins’ Geneseo office to call on him to set a town hall meeting to hear their concerns.

A total of 66 people, members of the Livingston County chapter of Stronger Together WNY and those following moveon.org, quietly held signs and waved to honking cars for about 45 minutes starting at 11:30 a.m.

“Collins is very, very close to the Trump administration and was on the transition team,” said Jillian Gruber. “We have asked and are asking for an audience with Collins himself. We ask that he have a town hall meeting to hear our concerns.”

The groups plan to appear at Collins’ office at 128 Main Street in Geneseo or the federal building in Rochester for ‘Stop Trump Tuesday’ every Tuesday for the first 100 days of Trump’s presidency.

“We want to make America think again, and to love again. It’s already great,” added Gruber. “We have to be aware that the administration will try and may be trying to use executive orders smokescreen bigger, more important issues like the environment.” 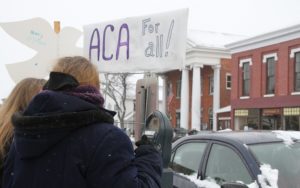 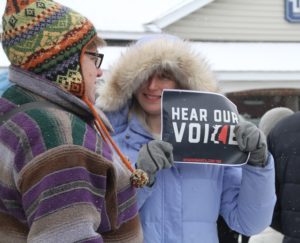 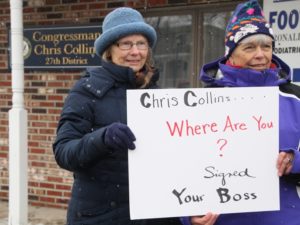