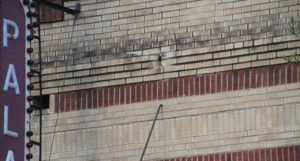 GENESEO – Despite an apparent water issue that partially cracked the 87-year-old Palace marquee from a wall on Main Street, its owners say that it isn’t about to fall down.

Don Livingston and Jim Sullivan are currently shoring up the southernmost corner of the marquee, which suffered some damage when a support rod broke loose from the wall and briefly sent water gushing onto the sidewalk at about 7:20 p.m.

Sullivan said that a clogged drain pipe retained excess water in the marquee, which eventually was too much for one of the marquee’s three large support systems.

Livingston and Sullivan immediately barricaded the sidewalk past Honey Girl Gourmet and continue to shore up the loose corner to prevent further damage.

Wine strollers tasted locally produced wine and snacks without interruption at Honey Girl. Neither Honey Girl nor any of the other businesses in the Palace suffered any damage. 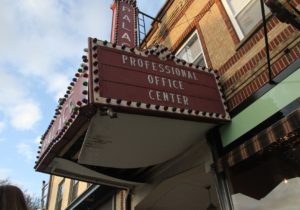 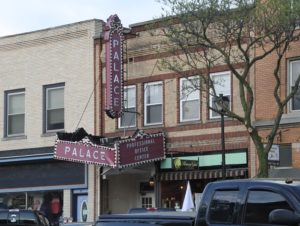