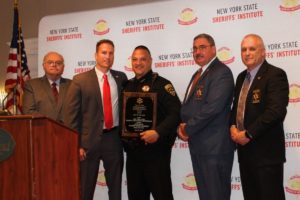 Undersheriff Matthew D. Bean has been awarded “Deputy of the Year” by the elected Sheriffs of New York State through the New York State Sheriffs’ Institute. The award is defined as a member who performed an act of exceptional valor and heroism, above and beyond the normal call of duty.  Undersheriff Bean was nominated by Sheriff Dougherty following his actions on May 27th of 2020 regarding a man armed with a gun, shooting at Deputies, as well as trying to ram his 18 wheel truck into patrol vehicles and oncoming traffic.

The Undersheriff was at home, off duty, when this public safety threat began in Livingston County.  The Undersheriff immediately deployed out of his home, with his issued county vehicle and
equipment. He took an active role in the pursuit and also took several shots at the truck driver at Exit 8 at Interstate 390.  The Undersheriff then took parallel roads to the pursuit and was able to get out ahead of the pursuit as the 18 wheeler was approaching the Village of Geneseo for a second time on Route 20a. The US connected with two Genesee County Deputies and quickly took command of the scene at Route 20a and Morgan View Road, coordinating a plan to end the threat. Collectively the threat was terminated prior to the truck making it back into the village of Geneseo.

Through his command leadership the Undersheriff brought conclusion to a significantly dangerous situation with many lives that were put in jeopardy. Miraculously, no civilians and no members of law enforcement were injured.  The follow up investigation determined that the deceased truck driver was an extremist who had been a militia member, trained in the use of firearms and had an extreme dislike for law enforcement.

“The Undersheriff represented himself, this Office and Livingston County in an extremely professional and courageous manner,” stated Sheriff Dougherty. “The US is a great cop, a great person and leads with his example. I could not be more proud of him, our team and our partners, on the remarkable job they did with a very challenging public safety threat.”