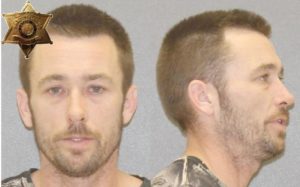 AVON – A Livingston County Sheriff’s Deputy arrested a Dansville resident on Tuesday on drug charges for allegedly having both opioid pills and marijuana.

According to a press release from Sheriff Thomas Dougherty, Mark Sharpe Jr., 39, was arrested for misdemeanor Aggravated Unlicensed Operation of a Motor Vehicle in Third Degree, misdemeanor Criminal Possession of a Controlled Substance in the Seventh Degree and Unlawful Possession of Marijuana.

On May 24 at approximately 8:03 p.m., Deputy Shawn Whitford of the Livingston County Sheriff’s Office assigned to ‘Operation Safe Interstate’ with his K-9 Utah conducted a traffic stop on Interstate 390 in the Town of Avon after observing a vehicle with an expired inspection sticker.

Whitford further alleges that Sharpe had Suboxone pills and marijuana on his person.

Sharpe was turned over to Central Booking Deputies at the Livingston County Jail for processing and a later arraignment.