SPRINGWATER – On Christmas Eve, the Livingston County Sheriff’s Office arrested a Mount Morris man for allegedly stealing a car and crashing it on Mount Morris Road.

According to a press release from Livingston County Sheriff Thomas Dougherty, Justin Gledhill, 20, was arrested for felony Grand Larceny in the Fourth Degree, misdemeanor Criminal Possession of a Controlled Substance in the Seventh Degree and multiple Vehicle and Traffic Law violations.

On Dec. 23 at about 3:45 p.m., Deputies were dispatched to Morris Road in the Town of Springwater for the report of a motor vehicle crash. The caller reported that a male had just been involved in a car accident and walked to her home.

While awaiting the arrival of Livingston County EMS to check Gledhill as a precaution, people arrived at the scene alleging that Gledhill had stolen the vehicle just prior to the crash.

Based on statements from witnesses, deputies allege that Gledhill was riding as a passenger in the vehicle when the driver stopped at a family member’s home and walked inside. Gledhill then allegedly got in the driver’s seat and took off.

Gledhill was transported to Strong Memorial Hospital as a precaution for medical evaluation from any injuries.

In the early morning hours of Dec. 24, Gledhill was released from Strong and taken into custody by Deputy Bill Clarke.

Gledhill was turned over to Central Booking Deputies at the Livingston County Jail for processing and pre-arraignment detention. Bail was recommended in the amount of  by the District Attorney’s Office. 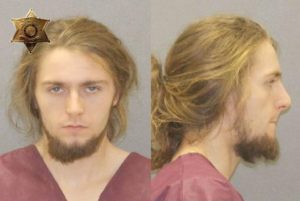