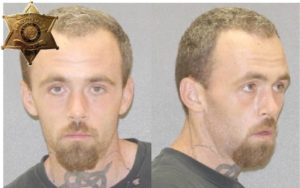 AVON – The Livingston County Sheriff’s Office arrested a Dansville resident on Wednesday for allegedly driving while impaired by both pain killer and stimulant drugs, and having controlled substance pills in his possession.

According to a press release from Sheriff Thomas Dougherty, Tyler McMurray, 32, was arrested for misdemeanor Driving While Ability Impaired by Drugs and misdemeanor Criminal Possession of a Controlled Substance in the Seventh Degree.

On June 1, Livingston County Sheriff’s Deputy Timothy Sweeting did conduct a traffic stop on a vehicle on 390 for alleged vehicle and traffic violations. During the course of the investigation at the stop, the Deputy Sheriff did suspect that the driver, McMurray, was operating the vehicle while in an impaired state.

McMurray did submit to standardized field sobriety testing and was placed under arrest for DWAI Drugs following the roadside investigation. McMurray was also found to be in possession of drug paraphernalia, as well as Lorazepam, an anti-anxiety medication which is a controlled substance.

McMurray was transported to the Livingston County Sheriff’s Office where Deputy Brandon Flickner, a certified Drug Recognition Expert, did administer a Drug Evaluation. It was Deputy Flickner’s expert opinion that McMurray was under the influence of a Narcotic Analgesic as well as a CNS Stimulant, making him unable to operate a vehicle safely.

Avon Town Justice Michael Torregiano arraigned McMurray in Avon Town Court and released him on his own recognizance.

Assisting at the scene of the stop were Deputies Caleb Cutting and Matthew Moran.