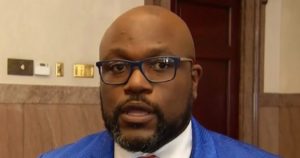 The Monroe County DA’s Office investigated controversial democrat, Flagler-Mitchell after a complaint from now 20-year-old Lakaya Sinclair that he had  sent her a photo of a man’s genitalia after gaining her trust. He met Sinclair after a mass shooting at her home.

The women who came forward have shown incredible courage in the face of public scrutiny – scrutiny that far too many women in their position face.  When public officials dismiss their truth, run for cover, and refuse to act, their trauma is only deepened.

The County Legislature has a responsibility to act, and they must do so today.  I am calling on Joe Carbone and the Republican Majority to stop covering for Ernest Flagler-Mitchell. It is past time for them to drop their opposition to the ethics reform and censure resolutions, and immediately hold a special meeting of the County Legislature to adopt measures that will hold Flagler-Mitchell accountable for his behavior. Failing to do so only serves to empower Flagler-Mitchell and provide him with a platform to continue to prey upon unwitting constituents.” He continued.