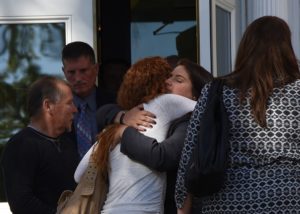 Allen hugs people who sat with her family in court. (Photo/Conrad Baker)

LIVINGSTON COUNTY – A defense attorney for Danielle Allen, charged with stabbing her ex-boyfriend Marcus Postell to death, asked a Livingston County Sheriff’s Office investigator why he did not call the father of the injured, intoxicated young woman they say they were interviewing as a possible domestic violence victim at the time.

In aggressive cross examination at a Monday hearing to decide the admissibility of evidence at trial, defense attorney Joel Daniels, who is co-counsel with Cheryl Myers Buth, asked Livingston County Sheriff’s Investigators Daniel Rittenhouse and Bradley Schneider whether interviewing Allen at Strong Memorial Hospital was appropriate considering their testimony that Allen was not in custody, was not being treated as a suspect, and was injured, intoxicated and had been given two Percocet pills for pain management.

“Not knowing how her condition affected her memory or her ability to be aware of her circumstances, you continued to question her [Allen],” said Daniels to Rittenhouse. “Do you think you took advantage of her by continuing to question her?”

Judge Robert Wiggins overruled the objection and confirmed that Rittenhouse’s answer to that question was ‘no.’

Daniels asked Rittenhouse why investigators did not call Allen’s parents during questioning at the hospital, after which she was dropped off at her parents’ house. Days later, she would be charged with felony Manslaughter in the Second Degree.

“Did you choose not to call him [Rick Allen] because you thought that he would tell his daughter not to talk to you?” asked Daniels.

“No. I made a decision to myself not to call Rick Allen,” said Rittenhouse.

Daniels and Myers Buth say that they also intend to take issue with the legality of search warrants, calling them ‘over broad.’

A total of 11 people, including Allen’s parents, watched court proceedings from the side of the courtroom closest to the defense table. They hugged, kissed and offered encouragement to Allen and her parents.

Five people, including some previously seen in court in support of the deceased, Marcus Postell, silently watched court proceedings from near the prosecution’s table.

Allen will return to Livingston County Court at a later date for further pre-trial proceedings. The case may proceed to trial at a date after that. 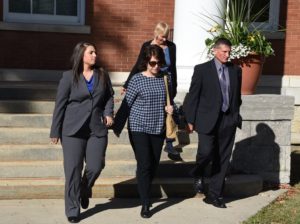 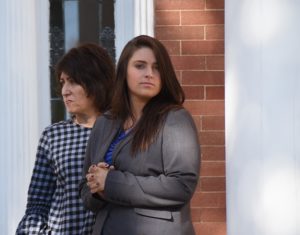