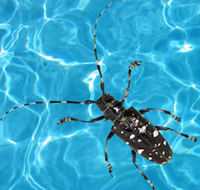 Watch the DEC’s video on Asian Longhorned Beetles below!

LIVINGSTON COUNTY – The Department of Environmental Conservation (DEC) wants local homeowners to use their pools to track spreading bug populations.

Every pool owner has a horror story about the beasts that become trapped in filters and skimmers, and the DEC wants to know if a specific invasive creepy-crawly, the Asian Longhorned Beetle (ALB), winds up in your pool.

“Pool monitoring offers a simple, economical approach to surveying for ALBs in the state and has the potential to become New York’s most effective method for detecting the invasive beetles,” said the DEC in a press release. “In addition, this monitoring program gives residents the ability to take an active role in protecting the trees in their yards, communities and forests. With citizens involved in looking for this pest, there is a better chance of finding new infestations early, helping DEC and other state and federal agencies focus their efforts to eliminate infestations.”

The Asian Longhorned Beetle, named for its home continent, has caused the death of hundreds of thousands of trees across the United States as an invasive species, particularly in maple trees in New York City; Long Island; New Jersey; Chicago, Illinois; Worcester, Massachusetts and Clermont, Ohio.

Maples are a core tree species for local and statewide syrup producers. Millions of tourists visit the Finger Lakes and New York State for the syrup and gorgeous fall colors, especially at Letchworth State Park.

There is hope for local trees if the beetle is found in Livingston County. According to DEC map data, the beetles have been successfully located and eradicated in Toronto, Canada and areas of New Jersey.

The DEC’s Forest Health Program’s survey lets the public help the DEC keep an eye out for these insects every August, when the beetles are expected to emerge from and become active outside of the trees they are infesting.

Pool owners are invited to join in the New York State Department of Environmental Conservation (DEC) fifth annual Asian longhorned beetle (ALB) Swimming Pool Survey through August 30 to help keep watch for the beetles before they cause serious damage to local forests and street trees.

In addition to owning a swimming pool, participants will need:

1. A digital camera or phone that takes photos.

2. The ability to send a photo via email or text message.

Those that don’t have a pool can still help. DEC expanded its photo collection to include anyone who spots a suspect beetle, whether it is found in their pool or not. Residents are also encouraged to submit photos if they believe they’ve found an emerald ash borer (EAB) (see what it looks like on DEC’s EAB web page) or another invasive pest damaging trees. Photos can be submitted to the forest health program email address listed below.

Directions for participating in the pool survey are outlined below:

Step 1: Through the month of August (when adults are active), check the debris collected in your filter and skimmers at least once a week or when you clean your pool.

Step 2: Look for the ALB (See what it looks like on DEC’s ALB web page). Contact the Forest Health Program at (518)478-7813 for a sheet to help identify insects collected.

Step 3: Take a picture of any insect you think might be an ALB.

Step 4: Send the photos of the insects that look like ALB to foresthealth@dec.ny.gov.

Step 5: Freeze the insect in a plastic container until DEC staff respond (typically that will be about a week). Staff will either instruct the participant to discard the insect or give instructions on mailing it, delivering it, or arranging for pick-up.

For more information on ALB and the Pool Survey, visit DEC’s website. To sign up for the survey, contact Jessica Cancelliere with the NYSDEC Forest Health Program at foresthealth@dec.ny.gov or (518)478-7813.