NYLON – The New York State Department of Environmental Conservation (DEC) urges outdoor adventurers to suspend exploration of cave and mine sites that may serve as seasonal homes for hibernating bats that are sensitive to the deadly white nose syndrome.

According to a press release from the DEC, human disturbances are especially harmful to the State’s bat population since the arrival of the disease known as white-nose syndrome, which has killed more than 90 percent of bats at hibernation sites in New York.

“DEC staff are working hard to protect bats in New York, and our ongoing research has clearly illustrated that white-nose syndrome makes bats highly susceptible to disturbances,” said DEC Commissioner Basil Seggos.“Even a single, seemingly quiet visit can kill bats that would otherwise survive the winter. If you see hibernating bats, assume you are doing harm and leave immediately.”

All posted notices restricting the use of caves and mines should be followed. If New Yorkers or visitors to the State encounter hibernating bats while underground, DEC encourages them to leave the area as quickly and quietly as possible.

When bats are disturbed during hibernation it forces them to raise their body temperature, depleting their fat reserves. This stored fat is the only source of energy available to the bats until the weather warms in spring.

The message comes as conservation groups and government agencies across the United States and Canada observe National Bat Week, Oct. 24-31, a celebration of bats and their important role in nature.

The northern long-eared bat is protected as a threatened species under both federal and New York State Endangered Species law. The current population for this formerly common bat is approximately one percent of its previous size, making the species the most severely impacted by white-nose syndrome. Nonetheless, northern long-eared bats are still widely distributed in New York. Their presence is documented in most of the 100 or so caves and mines that serve as bat hibernation sites in the State.

Anyone entering a northern long-eared bat hibernation site from Oct. 1 through April 30, the typical period of hibernation for bats, may be subject to prosecution.

There is currently no treatment for bats suffering from white-nose syndrome. Along with the New York State Department of Health, DEC is partnering with researchers from the National Wildlife Health Center in Madison, Wisconsin, and experts at several universities across the country to better understand the disease and develop a treatment. This collaborative effort helped identify that reducing disturbances at hibernation sites during the winter can help the remaining animals survive. 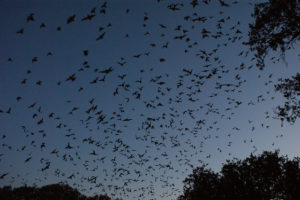