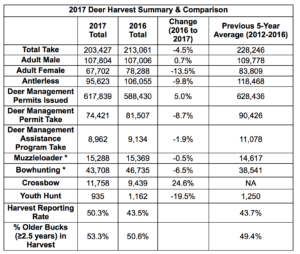 According to a press release from DEC Commissioner, Basil Seggos, the DEC 203,427 deer were legally harvested during the 2017-18 deer season and 7,509 of which were in Livingston County.

“Deer hunting in New York is a cherished and economically important tradition safely enjoyed by hundreds of thousands of residents and visitors each year,” Commissioner Seggos said. “Through the careful work of our conservation experts, hunting is a sound wildlife management tool that benefits all New Yorkers by reducing negative impacts of deer on forests, communities, and crops while providing millions of pounds of high quality local meat to families throughout the state. I commend our staff for once again making this a safe and successful season.” 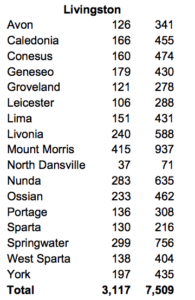 Number on left is adult buck and right is total take. (DEC)

The 2017 estimated deer take included 95,623 antlerless deer and 107,804 antlered bucks, an estimated five percent fewer deer than the previous year. Statewide, this represents a 10-percent decline in antlerless harvest and a buck harvest nearly identical to 2016. Hunters in the Northern Zone took 25,351 deer, including 18,074 adult bucks. In the Southern Zone, hunters took 178,076 deer, including 89,730 adult bucks.

The decline in antlerless harvest occurred despite DEC issuing more antlerless permits last season. DEC wildlife biologists have noted two important and encouraging items that emerged from the 2017 deer harvest. First, with 53.3 percent of the adult buck harvest averaging 2.5 years or older, hunters took an estimated 57,494 older bucks, setting a record in total number and greatest percentage of older bucks in the harvest.

“This is great news for New York hunters,” Seggos said. “Many hunters are choosing to voluntarily Let Young Bucks Go and Watch Them Grow, and all hunters are now having greater opportunity to see and take older, larger bucks.”

Second, the portion of successful hunters who reported their harvest as required by state law increased from 44 percent in recent years to 50 percent in 2017. Along with our Take It · Tag It · Report It campaign, DEC has made the process of harvest reporting substantially easier for hunters, providing phone, internet, and mobile app options. Harvest reports are critically important for accurate monitoring of deer harvests, and DEC encourages hunters to continue to contribute to the management process by complying with the reporting requirements.

DEC’s 2017 Deer Harvest Summary report (PDF) provides a suite of tables, charts, and maps detailing the deer harvest around the state.  Past harvest summaries are available at http://www.dec.ny.gov/outdoor/42232.html