AVON – New York State is exempting the Village of Avon from eliminating invasive Australian Common Reed (phragmites australis), which drinks up the water and dries out sludge at the wastewater treatment plant.

John Barrett, the Village’s Superintendent of Public Works, passed on a message from the New York State Department of Environmental Conservation (DEC) to the Village Board in December 2017 that the reeds would have to be removed and replaced with something native. However, he reported in January that the DEC has changed its tune and will allow the Village to keep the reeds as long as they continue to sprout on their own.

“I know that when we take these reeds out there’s still some root system left in there, so I asked if I need to use herbicide to kill these things,” said Barrett. “The DEC said no, as long as you’re not physically replanting them, as long as they come back every year on their own, we are exempt from removing them.”

There are two species of phragmites reed in New York, the American phragmites and the Australian phragmites. The Australian reed is invasive and aggressive, overpowering native reeds like cattails with their sheer size and numbers.

The DEC says that phragmites is capable of ‘vigorous vegetative reproduction and often forms dense, virtually monospecific stands.’ A DNA test can distinguish the American phragmites from the invasive Australian.

“Please note that identification of phragmites should be done by a professional botanist prior to treatment to distinguish the invasive non‐native race from the non‐invasive native,” says the DEC under their Control Methods for the Common Reed page here.

“Previously, the sludge would get pumped out onto a layer of blacktop with sand and drainage below, and the sun would dry it out,” said Barrett in December. “But then it would rain, and the whole process would have to start over again. So about 20 years ago a pilot program had us plant these reeds in the sludge and they would grow and dry it out quickly. It’s one of those things that’s almost too good to be true, it saves us so much manpower.” 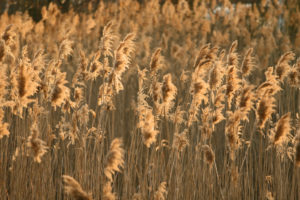