According to a press release from the DEC, the $1.2 million lab, headed by Cornell entomologist Mark Whitmore and partially funded by DEC with monies from the State’s Environmental Protection Fund, will be dedicated to researching and rearing biological controls to stop the spread of the invasive pest Hemlock Woolly Adelgid (HWA), which is threatening trees in about half of New York’s 62 counties and more than 15 other states.

“Preventing the spread of invasive species is the most effective way to fight and address the damage these species can cause to our natural resources,” said DEC Commissioner Basil Seggos. “DEC’s partnership and ongoing work with Cornell University researchers and the State’s investments in this new lab will help prevent the spread of this invasive pest, Hemlock Woolly Adelgid, with the use of better biological controls, bolstering our ongoing efforts to protect New York’s irreplaceable hemlock forests.”

According to DEC maps, HWA has been detected in the westernmost reaches of Livingston County.

HWA, a tiny insect from East Asia first discovered in New York in 1985, attacks forest and ornamental hemlock trees. It feeds on young twigs, causing buds to die and needles to dry out and drop prematurely.

Hemlock decline and mortality typically occur within four to ten years of HWA infestation in the insect’s northern range. Damage from the insect has led to widespread hemlock mortality throughout the Appalachian Mountains and the southern Catskill Mountains with considerable ecological damage, as well as economic and aesthetic losses. HWA infestations can be most noticeably detected by the small, white, woolly masses produced by the insects that are attached to the underside of the twig, near the base of the needles.

Biological control, or biocontrol for short, is the use of natural enemies to manage the population of a pest. In the case of HWA, this means using predatory insects found in areas where HWA is native. The focus of the HWA biocontrol lab is to research methods to grow healthy colonies of predatory insects and evaluate their effectiveness in managing HWA population growth.  The goal is to establish multiple predator species throughout New York to reduce HWA populations below the level where they cause hemlock trees to die.

“Cornell CALS is a leader in the discovery of new and improved bio-controls, such as parasites, predators and weed eaters, that naturally minimize pest damage to fruits, vegetables, and our natural resources such as hemlocks and cattails,” said Kathryn J. Boor, the Ronald P. Lynch Dean of the College of Agriculture and Life Sciences. “Our researchers are carrying out our mission as NYS’ Land Grant University in working closely with New York State to safeguard our natural environment. The HWA lab will protect New York’s majestic hemlock trees by developing new controls for the Hemlock Woolly Adelgid, which is spreading at an alarming rate. We thank the DEC and lawmakers for their support for funding that enables this important research.”

Eastern hemlock trees are among the oldest trees in New York with some reaching ages of more than 700 years. They typically occupy steep, shaded, north-facing slopes and stream banks where few other trees are successful. The trees help maintain erosion control and water quality, and the hemlock’s shade cool waters providing critical habitat for many of New York’s freshwater fish, including native brook trout.

Governor Andrew M. Cuomo increased funding for invasive species control to $13 million from the Environmental Protection Fund in the 2017-18 State Budget, including the funding for this important lab and a $2 million grant program for communities and groups across New York. This funding is providing critical support for prevention and eradication activities through programs like the Partnerships for Regional Invasive Species Management (PRISM) that protect against threats to New York’s biodiversity, economy, and human health.

Invasive species are detrimental because of their ability to reproduce quickly, outcompete native species, and adapt to new environments. Because invasive species did not evolve with the other species in their new location, they often do not have natural predators and diseases that would normally control their population within their native habitat. Economists estimate that invasive species cost the United States more than $120 billion in damages every year.

Senator Tom O’Mara, Chair of the Senate Environmental Conservation Committee, said, “What an outstanding and effective partnership between Cornell University and the state Department of Environmental Conservation to combat the spread of one of New York’s most damaging and threatening invasive species.  The Hemlock Woolly Adelgid is threatening trees in nearly half of the state’s counties and, consequently, this new effort to control and stop its spread couldn’t arrive at a better time.”

“Invasive pests, like the Hemlock Wooly Adelgid, can have a devastating effect on our state’s cherished natural resources, and it’s so important that we develop innovative solutions to control and limit their spread,” said Assemblywoman Barbara Lifton. “That’s why I’m so pleased to see Cornell and the DEC partnering on this initiative to protect the state’s hemlock trees. Fighting invasive species has long been a priority of mine, and I was proud to support an increase in funding to control invasive species in the state budget.” 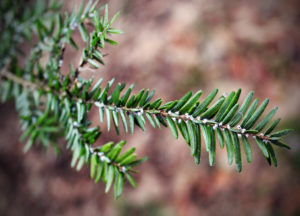 (Photo/Nicholas A. Tonelli via Flickr.com)