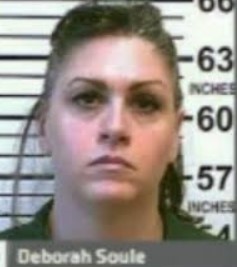 Deborah Barbas Soule, formerly of Bloomfield, has been paroled from Bedford Hills Correctional Facility, following a hearing on February 4 . She was originally sentenced to 21 years to life for second degree murder and first degree manslaughter.

Soule was convicted in 1996 in the death of 2-year-old toddler Nicholas Christian Miller. At the time, Soule, then 25, was dating Miller’s father, Randy Miller, and the toddler was staying overnight on Soule’s daughter’s bedroom floor.  During the night, Soule tripped over the toddler, landing on both knees, and became enraged, and beat and stomped on the toddler.  When the toddler was returned to his mother, Katie Wise, it was clear he was sick, so she took him to Noyes Hospital in Dansville, where he died of cardiac arrest and septic shock from ruptured intestines.

The toddler’s mother, Katie Callahan Wise, as well as others, have petitioned the parole board every two years to keep Soule behind bars when notice was given she was up for a parole hearing.  Soule’s next parole hearing was set for September 2021, but a new date was arranged by Soule’s attorney and the State Attorney General’s office for Feb. 4, and Wise was given only a few days’ notice of the hearing, with no time to organize another petition, or speak in person to the parole board with a victim impact statement. In the past, the court noted there was community opposition to Soule’s release, but other than a phone call from Wise, not much opposition was presented this time because, according to Wise, there was no time to organize anything with such short notice that the hearing had been moved up to Feb. 4, 2021, and the board apparently didn’t consider any opposition in the past.

Wise learned just recently that Soule will be released March 2, under the Supervision of the corrections department.  According to the parole officials, Soule had many supportive letters from her professors at Marymount College (at the correctional facility) who saw her as a “positive, honest, individual” who would be an asset to the community.  Court records show that she has worked on a college degree while at Bedford, and wants to pursue a masters degree in social work. Parole hearing records also show that this time there didn’t seem to be much community opposition to Soule’s release.