GENESEO – Police used ‘spike strips’ to disable a speeding stolen vehicle occupied by a driver they believe was drugged with no valid license and a 15-year-old male passenger.

“Officer Ray Goulet stopped the vehicle for speeding on Mount Morris Road,” said Osganian. “The driver had a suspended license, was intoxicated by drugs, gave a false name to the officer, and took off. Officer Goulet pursued the car and the Livingston County Sheriff’s Office assisted by deploying spike strips on Lima Road. It is very fortunate that no one was hurt.”

The driver can be seen swerving to avoid the spike strip in Geneseo Police dashcam video but the strip did puncture the tires and send the vehicle into a ditch in the area of Lima Road and North Road in the Town of Geneseo.

No one was injured in the incident.

Police found that the vehicle was reported stolen in Rochester.

The teen is of no family relation to Salmon. Osganian said that police ‘had to reunite the youth with his father.’

Geneseo Justice Thomas Bushnell arraigned Salmon and ordered her held at the Livingston County Jail on $7,500 cash or $15,000 bond. 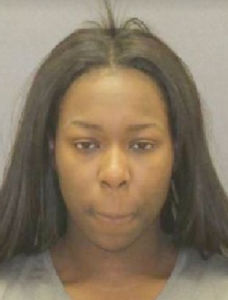