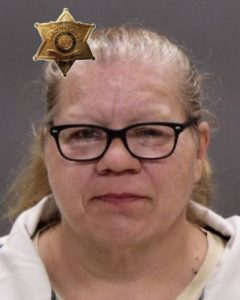 On September 4, 2021 at approximately 11:25 am, Sheriff’s Deputies responded to a residence on Parkwood Lane in the Town of Livonia for the report of a larceny. The caller told Deputies that she had numerous credit cards and a cell phone stolen from her.  It is alleged through the investigation that Stacy M. Akers, age 54, used one of the stolen credit cards at a business in the Town of North Dansville on September 1, 2021.  On September 16, 2021 Sheriff’s Investigator Josh Monster arrested and charged Akers with felony Criminal Possession
of Stolen Property in the Fourth Degree and Petit Larceny.

Akers was transported and turned over to Central Booking Deputies at the Livingston County Jail for processing and prearraignment detention. The District Attorney’s Office was contacted in regards to bail due to the felony level charges. It was recommended that Akers be held without the possibility of bail due to her having two (2) previous felony convictions.