DANSVILLE — Pickle Ball is one of the fastest growing sports in America and Livingston County is about to get its first official court in the Village of Dansville and possibly a league.

Dave Luce, who is also the ZBA Chair, asked the Village Board if they could paint official pickle ball court lines at the skate park. The nets would be removed when no one was playing so the rarely-used skate park would not be impacted.

“It’s sort of an old folks game because its not played with a tennis ball, its played with a wiffle balls,” said Luce. “Our caliber isn’t that fast, but the pros is unbelievable.”

Luce is going to form a league as well. He stated that he and others gather a few times a week and play on a regular basis.

The Village took no official action on the matter but directed that the lines be painted.

“That’s what the parks are for,” said Mayor Peter Vogt. “People to use them.”

The park is open to the public. Contact the Village of Dansville for more details. 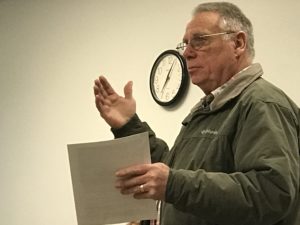 Luce speaks to the Village Board. (Photo/Josh Williams)