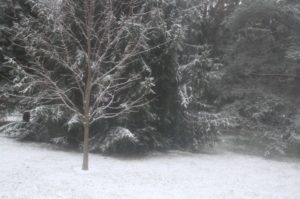 DANSVILLE – The snow is causing school delays in the south of Livingston County Tuesday morning.

According to our news partners News10NBC, Dansville Central Schools and Kidstart Dansville will open two hours late Tuesday. Livingston County Sheriff Thomas Dougherty said that no serious hazards have been reported this morning.

“Sheriff Dougherty advises that most roads in Livingston County have some snow and slippery spots,” posted the Sheriff’s Office to Facebook. “Our Towns and Highway employees have been outsanding and plowing since early this morning. As of 6 a.m. we have had no reports of dangerous conditions, nor have we had any reported motor vehicle accidents.”

It is likely to rain on Thursday and Thursday night. It will likely be cloudy, with a high near 40. Winds should be 10 to 14 mph from the west.

Temperatures are expected to drop Friday night to about 24. Snow showers are likely.

Saturday has a chance of snow showers and a high near 30.