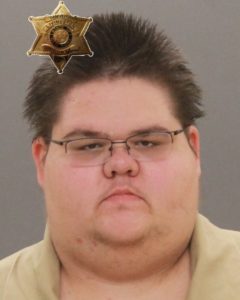 DANSVILLE -Sheriff Thomas J. Dougherty reports the arrest of a NYS Registered Sex Offender on  felony charges after an investigation by the Sheriff’s Office.

On November 13, 2020 Sheriff’s Investigator Connor Sanford arrested and charged Kyle J. Webster,  age 23 from Dansville NY, with felony Possessing a Sexual Performance by a Child and felony  Failure to Register and Verify.

It is alleged by investigation that Webster, who is registered as a level one sex offender, did possess  images of sexual conduct of by a child less than sixteen years of age on his cell phone. It is further  alleged that Webster also failed to register internet e-mail accounts along with login information to  social media accounts as required by law.

The NYS Corrections Law section 168-f (4) states that any sex offender shall register with the division  no later than ten calendar days after any change of address, internet accounts with internet access  providers belonging to such offender, internet identifiers that such offender uses, or his or her status  of enrollment, attendance, employment, or residence ant any institution of higher education.

Webster, who was currently remanded to the custody of the Sheriff in the Livingston County Jail on a  Violation of Probation, was turned over to Central Booking Deputies for processing and pre arraignment detention as the offenses did qualify for pre-arraignment detention under the NYS  Justice Reform Act. The District Attorney’s Office was contacted in regards to bail due to the felony  level charges. It was recommended that Webster be held on $10,000 cash bail or $20,000 bond.

Webster was later arraigned at the Livingston County Centralized Arraignment Part (LC-CAP) at the  Livingston County Jail before Town of Ossian Justice Wilson. The Judge did remand Webster to the  custody of the Sheriff on the recommended bail of $10,000 cash or $20,000 bond.