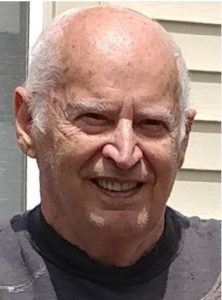 James E. “Jim” Cone age 78, passed away early Tuesday afternoon May 12, 2020, at Strong Memorial Hospital in Rochester following complications from a fall at home.
He was born in Hornell on February 21, 1942, a son of the late Delbert and Thelma (Markle) Cone. He was also predeceased by his siblings, Mary Booth and Harold Cone. On January 7, 1984, he was married to the former Colleen Monahan Cone, who survives.
Jim was a US Air Force veteran serving from 1960-1962. He was a communicant of the Holy Family Catholic Community at St. Mary’s Church in Dansville. He was a former designer at the Foster Wheeler Energy Corp in Dansville and Delphi in Rochester. In his free time, he was an accomplished artist and enjoyed hunting and fishing when his health allowed him to.
Surviving in addition to his wife Colleen are four daughters; Angela Woznick of PA, Vicki (Jamie) Flaitz of Hornell, Mary Cone of Dansville and Michele Stewart of Hornell; a brother Joe (Charlene) Cone of Hornell, several grandchildren, great-grandchildren and nieces and nephews.
A memorial Mass of Christian Burial will be Celebrated at a later date. Interment with Full Military Honors will be in Greenmount Cemetery, Dansville. Arrangements are by the Hindle Funeral Home, Inc., 271 Main St. Dansville. Online memorials may be left at HindleFuneralHome.com. Memorials may be made to the Dansville Ambulance Fund, 18 Ossian St. Dansville, NY 14437
Services for James Cone
There are no events scheduled. You can still show your support by planting a tree in memory of James Cone.
Genesee Local Offers